Naaborko Sackeyfio-Lenoch’s new book, The Politics of Chieftaincy examines debates over authority and property in Accra, Ghana, during the peak decades of British colonial rule. Between 1920 and 1950, imperial policies marginalized educated elites, local authorities, and landowners in favor of Ga chiefs, whom the British authorities viewed as more loyal to the empire. Conflicts erupted throughout the city over chieftaincy, succession, and land, producing new political movements and local institutions. 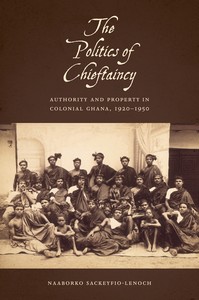 Drawing on a broad range of archival records of chieftaincy and litigation cases from this era, Naaborko Sackeyfio-Lenoch demonstrates how these disputes opened new arenas for Accra’s residents to engage in dialogue about the efficacy of chieftaincy and the meaning of political authority and property. Despite the prominence of chieftaincy in the lives of the people of Accra, Sackeyfio-Lenoch shows that they were able to critique their political traditions and adapt their institutions to new local, national, and global pressures. The volume offers then a vital case study of Africans’ responses to colonialism, modernity, and globalization, and provides an important lens for understanding urban and political processes in Africa during the first half of the twentieth century.

–From the Back Cover