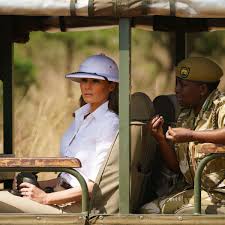 When Melania Trump donned a pith helmet on her 2018 trip to Kenya—one of four African countries she visited during her first official solo trip abroad—commentators pointed out that her choice to wear the colonial-era throwback was tone deaf and smacked of nostalgia for a time characterized not only by sartorial oddities, but by brutality and plunder. Others observed that it was consistent with her husband’s white supremacist governing ideology, which, by extension, she represents as First Lady. Predictably, there were those who dismissed criticism of Trump’s colonial millinery as liberal hysteria….Read more at ‘Perspectives on History”