Harcourt Fuller, of Georgia State University’s Department of History, has a forthcoming book, Building the Ghanaian Nation-State: Kwame Nkrumah’s Symbolic Nationalism.  This is the description from the book: 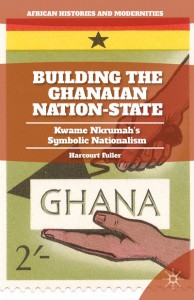 As the first country in Sub-Saharan Africa to gain independence from a European imperial power, Ghana has always occupied a position of primacy in the African political and historical imagination. This is due in no small part to the indelible impression left by its first president, the charismatic and self-promoting Kwame Nkrumah, who by his death had become one of the most iconic figures of the postcolonial era. Nkrumah’s legacy has long been the subject of debate, with some depicting him as a pioneering nationalist and others as a dictatorial megalomaniac, and the political, social, and global-historical dimensions of his presidency have been thoroughly studied. At the same time, the symbolic, semiotic, iconographical, and ephemeral strategies he used to consolidate power and construct a coherent Ghanaian nation-state have been largely neglected by scholars. This innovative study of Nkrumah and Ghana offers a fascinating look at his propagandistic use of political iconography through ‘symbols of nationhood’ such as currency, postage stamps, museums, monuments, Adinkra symbols, the national anthem, emblems, and both national and party flags. As author Harcourt Fuller demonstrates here, the premiership of the self-proclaimed Founder of the State of Ghana was mainly characterized by a cult of personality wherein Nkrumah branded the national flock with his image by personalizing public symbols of nationhood.