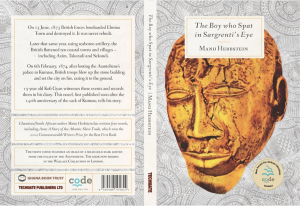 Manu Herbstein,  GSA member and independent write and scholar, is winner of the ALA 2016 Book of the Year Award (Creative Writing) for his novel The Boy Who Spat in the Sargrenti’s Eye. He received the award at the African Literature Association’s Awards Ceremony in Atlanta on 9 April 2016.

His first novel, Ama, A Story of The Atlantic Slave Trade, won the 2002 Commonwealth Writers Prize for Best First Book and was published in South Africa, India, Ghana and the USA. Another novel, Akosua and Osman, won a 2011 Burt Awards for Africa Literature in Ghana.

The Boy Who Spat in the Sargrenti’s Eye and others his books are available on Createspace.