GSA is delighted to announce that, for the second year in a row, a GSA member has won the African Studies Association’s prestigious Melville J. Herskovitz given to “the author of the most important scholarly work in African studies published in English during the preceding year”. Previous winners of the prize have included prominent names in Ghana studies such as Ivor Wilks, Sara Berry, Claire Robertson, Kwame Anthony Appiah and Frederick Cooper, as well as scholars of wider Africa such as Mahmood Mamdani and V.Y. Mudimbe. The 2014 joint winner of the Herskovitz prize was Carola Lentz for her book Land, Mobility and Belonging in West Africa.

Abena Dove Osseo-Asare’s book Bitter Roots: The Search for Healing Plants in Africa was awarded the 2015 Herskovitz prize at the 58th Annual Meeting in San Diego, held from 19 to 22 November 2015. 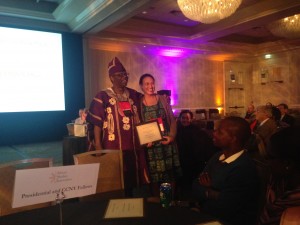 ASA’s review of the book reads, in part: 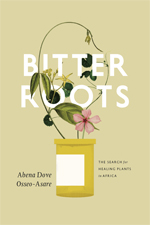 “Bitter Roots is a fascinating comparative history of how six healing plants from African have been transformed into new medicines. Unsettling much of the received history of drug discovery, the book’s seamless integration of medicine, law, and botany tells a compelling story about the diverse actors–healers, chemists, rural communities, and multinational drug companies–that have contributed to the shaping of drug knowledge across wide geographic regions. Rigorously researched and thoughtfully written, Bitter Roots sets a formidable standard in the field of science studies…

“As she follows the plants through their mutation from herbal recipes in markets in Accra, Johannesburg, and Antananarivo to laboratory experiments across the world,Osseo-Asare uncovers a fundamental paradox: while bioprospecting is motivated by a race for patents and scientific recognition, the historical migration of ‘bitter roots’ unsettles the conventional notion that ‘scientific’ authority weighs more than ‘traditional’ medical expertise.

“Bitter Roots boldly reconceptualizes knowledge production, compelling us to rethink the place of Africa in the history of science. [It also]raises some critical questions about the future of bioprospecting and the potential for bioprosperity in an age of deepending global inequalities”.  [ASA 58th Annual Meeting program, p. 37].