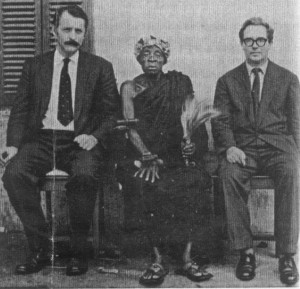 On October 7th, 2014, Northwestern University Professor Emeritus Ivor G.H. Wilks passed away at the home he shared with his wife, Nancy Lawler, in the west of his beloved Wales.  A prolific author, meticulous researcher, and a teacher of boundless generosity, Professor Wilks is best known for his foundational texts on the history of Asante and of northern Ghana.  He will be missed by many, especially by his wife, his four children, and his many grandchildren.  He also leaves behind scores of grateful former students, like me, who were fortunate enough to call Ivor Wilks “teacher,” “advisor,” and “friend.”

I first met Ivor in 1976, when I appeared in his office doorway – a befuddled, nervous, and apprehensive undergraduate – with a rather vague and naïve idea about applying for an undergraduate research grant to study in Ghana.  In retrospect, Ivor had no reason to take me seriously and probably every reason to brush me off, but he did not. He asked me in; he introduced himself first; he asked about my background, and my plans, and he seemed genuinely interested in what I had to say.   A year later I was off to Ghana and a few years after that I returned to Northwestern to complete my Ph.D. under his guidance. I was a first generation college student when I met Ivor.  I had absolutely no idea; no clue that there even was such a thing called “graduate school,” much less that it was something I might want to do.   But Ivor was amazingly adept at demystifying the academy and his own discipline of history.  He taught history as a craft, much like cabinet-making and his instructions were straightforward:  assemble your tools, hone your skills, practice your craft.

Over the years I have met dozens of Ivor’s former students—in the US, Britain, and Ghana—and my experience was by no means unique.  Ivor was an extraordinary teacher and mentor, patient and generous with his time, and remarkable in his ability to make students (be they disoriented freshman or advanced PhD student) feel that their ideas were worthwhile and deserved to be taken seriously. Indeed, the hallmark of Ivor’s long and illustrious career was the inseparability of his scholarship and his teaching.   Ivor lived by the Asante proverb “Nyansa nyɛ sika na wɔakyekyere asie (Wisdom is not gold dust that should be tied up and put away).”  He never recognized a boundary between research and teaching and that, I suspect, goes a long way toward explaining his remarkable success as a graduate instructor and dissertation advisor.  In the 1960s, he supervised an entire generation of master’s theses at the University of Ghana.  Beginning in 1972, he directed the completion of over 30 doctoral dissertations in African history and served on the committees of countless others.  Several of those whom he supervised went on to produce the next generation of PhDs in African history on three continents.

But it is, of course, historical scholarship for which Ivor is best known and many, myself included, would argue that his was absolutely crucial to the founding of African history as an academic discipline in the late 1950s and to its development over subsequent decades.  But I know full well that Ivor would throw up his hands in horror if anyone so much as hinted at him being a “founding father” of the field.  In 1995, he was invited to give the Aggrey-Fraser-Guggisberg Memorial lectures in Ghana—a series of five presentations, which were greeted each night by over a thousand eager listeners.  To that audience, he sought to explain his own intellectual lineage—a lineage in which he was no “founding father.” The Muslim Dyula communities, he said, keep detailed records:  “I Muhammad, son of Sulayman Watara, studied under Ibrahim …who studied under . . . [and] in this sense,” Ivor told this audience, “I have no teacher or teachers, I have no isnad, no chain of teachers extending back over the generations.  My real teachers were men, and sometimes women, who had no academic credentials whatsoever, but whose understanding of the past was truly remarkable….”   Ivor then concluded his lecture by paying tribute to six of those extraordinary teachers:  Jacob Dosoo Amenyah, a veteran of World War I; Domfe Kyere of the Kumasi Nsumankwaa, born in the 1860s, whom Ivor met when he was in his 90s; Isaka Dodu, the Chief Butcher of Wa; al Hajj Muhammad Marhaba Saghanughu, Mufti of what was then the Upper Volta; al-Hajj Osumanu Boyo of Kintampo; and, finally, Rev. Joseph Agyeman-Duah, of Kumasi.  I am sure that rather than being remembered as a “founding father,” Ivor would want to be remembered as a good student, as one who listened and, in turn, passed on his knowledge, as part of a long lineage that neither began nor ended in the western academy.  Tete ka asom—ancient things, as Ivor learned and as he taught, remain in the ears. 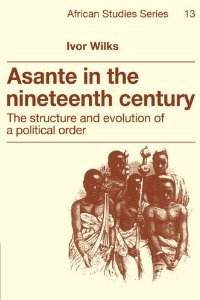 And over the decades, Ivor’s careful listening and keen analytic eye resulted in the uncovering of vast collections of sources for African history and in the publication of an incredible corpus of research.  Much of Ivor’s work focused on the Akan states of southern Ghana, especially on Asante.  His Asante in the Nineteenth Century (winner of the 1976 Herskovits prize) and Forests of Gold, combined with a host of articles and chapters, uncovered the complexity and dynamism of precolonial African history in ways that remain unrivaled in the historiography of the continent.  While much of that historiography, particularly in the early years, focused on politics and the state, largely to counter the ignorance and arrogance of the Trevor-Ropers of academia, it came to embrace a richness and diversity of interests from economic and social history to women’s history, religion, law and education.

While Ivor’s work on Asante is probably his best known, it is, in fact, only one of the areas of African history to which he contributed.   His research and publications on Islam, especially on the great networks of the Dyula in West Africa and on Muslims in Asante and in Wa, is among the most distinguished in the field.  Again, his painstaking efforts to get at local histories and sources—local chronicles, genealogies, letters and oral reminiscences—have assured that African voices and African histories remain central to the western academy’s understanding of Islam in precolonial West Africa.

Though Ivor was based at Northwestern University for a quarter of a century, his years in Ghana (1953-1966), including as a founding member of the University of Ghana’s Institute of African Studies, forever shaped how he viewed the world and his own place in it.  Indeed, the many thousands who attended his lectures in 1995, years after he had moved to Northwestern, are a powerful testament to the high esteem in which he is held in Ghana to this day, and not just within the walls of the university.  I have lost count of the number of times that I have asked older, often non-literate, Asantes, about some aspect of their past, and they have simply and patiently told me: “ah, but you must go read Wilks.”   What a perfect tribute to a remarkable historian.